“Destinacioni: Shqipëri”, është editoriali i revistës më të njohur angleze TNT e fokusuar në udhëtimet, guidat gastronomike dhe jetës së natës anembanë botës. Në editorialin e sotëm TNT thotë se “Shqipëria është vendi i mistereve”. Sipas TNT-së, ka shumë për të zbuluar në Shqipëri, duke përfshirë vargmalet mbresëlënëse, plazhet mahnitëse dhe nje jetë te ngadaltë tradicionale. Të udhëtosh drejt Shqipërisë, sipas anglezëve të TNT-së është lehtësisht e suprizueshme, por më e mira të mos e planifikosh udhëtimin tënd, kohë më parë.
Destination: Albania
Albania is a bit of a mystery. Holidaymakers in this region are too busy hopping around the Greek Islands or exploring the history-riddled former Yugoslavia to consider Albania and its…., well, exactly. Nobody knows much about this country. Yes, there are lots of Mercedes and donkeys. But there’s so much more to discover in Albania, including impressive mountain ranges, stunning beaches and a slower, more traditional way of life.
Travelling in Albania is surprisingly easy, although it’s best not to plan far ahead. There are many more accommodation options than advertised online and while the mini buses, known as furgons, can get you most places you’ll need to go, the schedules can be difficult to determine in advance. If all else fails, ask a local. Everyone in Albania seems to know someone with a taxi, restaurant or guesthouse and is eager to call them on your behalf. 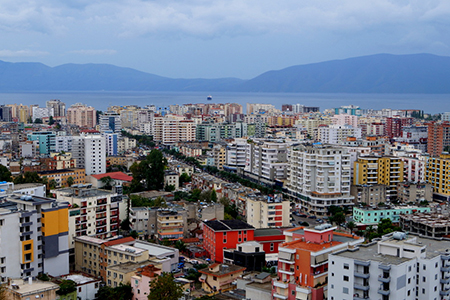 Vlora is cosmopolitan coastal city, with more year-round atmosphere than Saranda.
What to do:
If you can be tempted from the beach, walk along the palm-tree lined Boulevard Ismail Qemali and climb to Kuzum Baba (visitvlora.com/city/kuzum-baba-kuz-baba-vlore) for the best (and free) view over the city. The National Museum of Independence ( 355 332 9419) was the headquarters of Albania's first government.
Where to stay:
Hotel Martini ( 355 6920 38877) is centrally located on one of the busiest roads in the city, plus it’s better priced than the waterfront hostels
Going out:
Most cafes in Albania have a mostly male clientele and rarely serve food, so Pasticeri Kafe Izraelite ( 355 6840 67229) is a welcome change. The cakes and Israeli-inspired desserts are worthy of more than one visit. Irish Time ( 355 6968 33785) and Club Pizeri Itarus ( 355692676430) are popular watering holes in the evening.

Shkodra is an interesting mix of traditional ways of life and modern influences. One minute you’ll be walking along a rubbish-lined gravel road and pass a family sitting with a goat in a donkey-led wagon. The next you’ll be sipping coffee in a cafe while jazz music plays in the background.
What to do:
Get a taxi to take you to Mes Bridge, which was built almost 250 years ago during the Ottoman Empire. Keep your taxi driver for the trip to Rozafa Castle (albaniantourism.com/shkoder/about-shkodra). Visit in the late afternoon to admire the view over Lake Shkodra and watch the sunset.  If you can brave the seemingly lawless Albanian roads, hire a bike and ride out to Lake Shkodra (albaniantourism.com/lake-shkodra). The mountain village of Theth in the Albanian Alps is about three hours away by bus and a trip there is best organised from Shkodra.
Where to stay:
Florian’s Guesthouse ( 355 6823 35921) is a short taxi ride from the centre, but worth it for the garden-sourced vegetarian dinner and homemade wine. You’ll see a different side of the city on a walk around the neighbourhood where people will come out of their houses to say hello.
Going out:
Arti'Zanave ( 355 6737 66211) is one of the best places in Shkodra for traditional Albanian food. Another popular haunt is Bar San Francisco ( 355 6655 52552), which has a more international flavour. 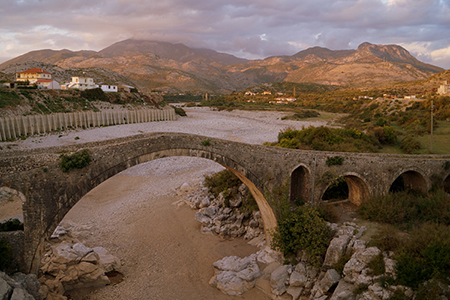 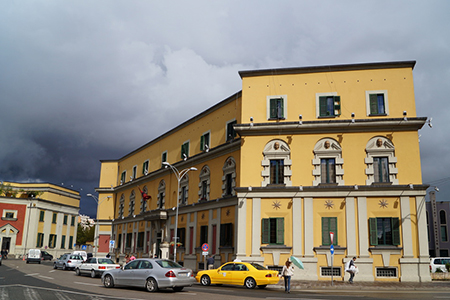 With its large shopping centres, modern bars and colourful buildings, Tirana is probably the least Albanian part of Albania.
What to do:
Albania’s capital doesn’t require more than a day, in which time you can visit the National Gallery of Arts (gka.al), the National History Museum (hist.tirana.cchnet.it), admire the frescos inside the Et'hem Bey Mosque and visit Tirana Park on the artificial lake, which is exactly what the name suggests. If you find yourself here for longer head to Mount Dajti (dajtiekspres.com) and ride the cable car in the national park.
Where to stay:
Walking into the incredibly cool Trip’N’Hostel (tiranatripnhostelalbania.com) makes you wonder if you crossed a border somewhere. It’s hidden behind a large gate on a small side street and its funky décor and cosy feel is unexpected.
Going out:
Oda restaurant (+355 4224 9541) is one of Tirana’s best-known restaurants and much loved for its homely feel. Era (+355 4226 4475) is another Tirana staple. It has an up-market atmosphere, but is still cheap. After dinner visit Tirana’s nightclub district, Blloku.

People visit Saranda to party, lie on the beach, or for a base to explore more interesting sites nearby.
What to do:
There’s little to do in the city itself, but you can reach quite a few cool attractions by bus. The Blue Eye (visitsaranda.com/html/thingsToDo.html) is a natural spring 15km from Saranda. Its sparkling water is 10 degrees and up to 50m deep. The more adventurous visitors dive from a rusty platform above the spring. Allow a few days to visit the ancient city of Butrint (whc.unesco.org/en/list/570), the islands at Ksamil (albaniantourism.com/ksamili-islands), the UNESCO town of Gjirokastra (gjirokastra.org/home.html) and even Greece. The Greek island of Corfu is just a 30-minute ferry ride away (ionian-cruises.com/lines.php).
Where to stay:
The Hairy Lemon (hairylemonhostel.com/saranda) is a small but social hostel a few streets from the centre. It’s not uncommon for the guests to cook a family-style dinner and eat together. It isn’t open in winter, but SR Backpackers is (backpackerssr.hostel.com/index.php), which is more central, but lacks the atmosphere of the Hairy Lemon.
Going out:
Saranda is a summer destination – many cafes, restaurants and clubs close for the off-season. Limani (+355 6820 77471) serves up reasonably priced Italian food, and ask your hostel for directions to Plazha Ri to try traditional dishes such as stuffed peppers and eggplants. Finish the evening by joining the party at Mango Beach (discomango.com), the biggest club in Saranda. 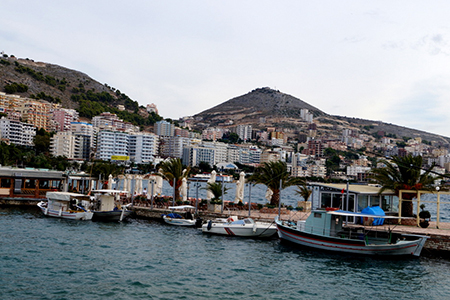 Nicknamed the City of a Thousand Windows, Berat is one of the most beautiful towns in Albania. It may be old fashioned compared to the country’s larger cities, but that’s half the charm of coming here.
What to do:
From the top of the 13th-century fortress (whc.unesco.org/en/list/569) you’ll have a good view of Berat’s famous white Ottoman houses, which are featured on the UNESCO World Heritage List. When you’re back on level ground, cross the Gorica bridge and explore the narrow, cobbled streets of the Gorica Quarter.
Where to stay:
Berat Backpackers (beratbackpackers.com) in the Gorica Quarter is refreshingly clean and well-equipped.
Going out:
Berat is more traditional than Albania’s larger cities and the options for entertainment are limited. Boulevard Republika, which is closed to traffic at night, is lined with cafes, although there are few women here at that time. You’ll find a more inclusive atmosphere and good food on the rooftop of Hotel Tomori (hoteltomori.com). 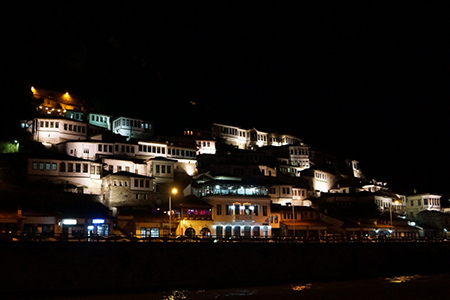