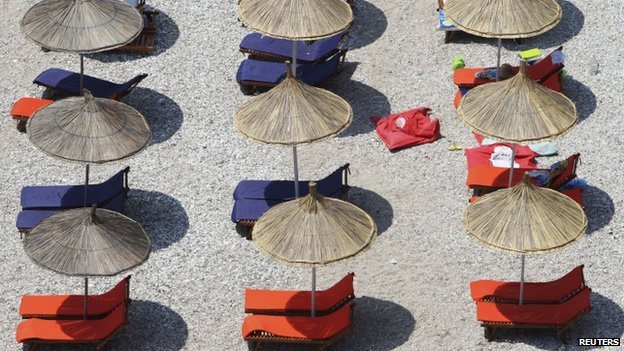 Albania is the latest Balkan country to want to join the European Union. To do so, it will have to convince Brussels it has tackled corruption and organised crime. After decades of holidaying on neighbouring Corfu, Julia Langdon took the hydrofoil to see how formerly Communist Albania was shaping up.
For 30 years I have been visiting the north-east coast of Corfu. And for all that time I have been looking at Albania, often with a shiver at what little we knew about it.
Its bare coastline and forbidding mountains seemed to represent the isolation of the country, cut off by communism for half a century, home to the mafia - the badlands of the Balkans.
In the old days, the Straits of Corfu were raked by Albanian searchlights trying to catch those desperate enough to risk a night-time swim, or a paddle in the inner tube of a car tyre to escape its hunger and brutality.
When communism collapsed, I had heard the putt-putt of outboard engines at night on piratical missions. "The children usually sleep through the early-morning gunfire," I used to joke, but it was true. 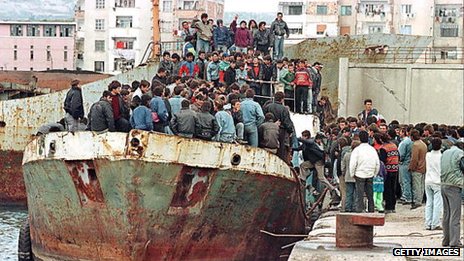 Thousands of Albanians tried to flee the unrest in their country in the late 1990s
I had watched the tracer bullets light up the night-time sky over Saranda, the small city in the south of Albania where the last violent rebellions occurred as the country struggled to secure some sort of democracy 20 years ago.
Continue reading the main story

Now I am approaching Saranda for the first time. I am on the hydrofoil, the Flying Dolphin, prepared for heat and poverty and boys begging for biros.
And what was the last thing I expected to see? Sun umbrellas on the beach. Welcome to the Albanian Riviera.
There is a promenade with cafes, bars, fairy lights, restaurants and tourist shops selling universal tourist tat.
There are oleanders and palm trees and hibiscus and solanum. There are sunbeds. A water playpark. Carefree children diving from a platform on a jetty. And holidaymakers, although few of them apparently foreign visitors.
There are also cars. Expensive ones. And in the middle of this very small city: nice-looking apartment buildings. Smart hotels. 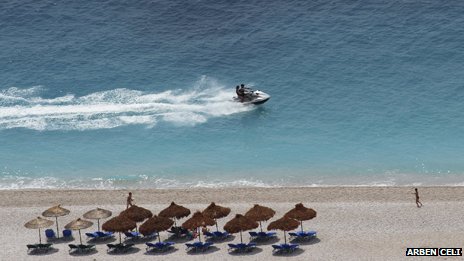 The new Albanian Riviera
Era, a pretty, dark-haired Albanian in her 40s, is a tourist guide who wants to boast as much about the new Albania as describe the archaeological site of Butrint that I plan to visit.
Where once the second language in schools was Russian, now it is English and Era speaks it enthusiastically. She also relishes the freedom to say what she wants without fear.
They have just had an election here and Era - whose name means "echo" - is very pleased with the result.
"Albania is making a big progress on the road of democracy now," she tells me. "Before if we would complain, we very soon would find ourselves in police station. A lot of things are changing here." 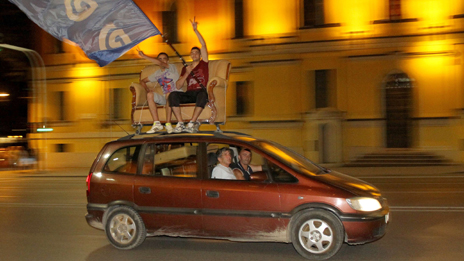 Celebrations after last month's elections
She is old enough to know about the bad old days. When she was a girl, the youth of Albania were forced to work in the fields on Sundays. In this area they planted olives and oranges.
Agriculture and fishing are still hugely important to the economy but the average monthly wage is only just over £200 (it sounds better in Albanian lek, where it converts to 32,800) and the old age pension is less than half of that.
People are helped by their children, says Era, and also by the informal - ie black - economy and by money sent home by the four million Albanians who live elsewhere.
There are problems in this transition economy. There is building work everywhere. The infrastructure is far from adequate.
There are cars. But no car parks. There are limited consumer goods but no rubbish collection. There is fly-tipping at every turn.
There is only one airport - named after the country's most famous native, Mother Teresa - but that is in the capital Tirana, six hours' drive away - if you are lucky. Most of the roads are frightful.
None of this dents Era's optimism. "We hope new politicians will do better things for us in future." 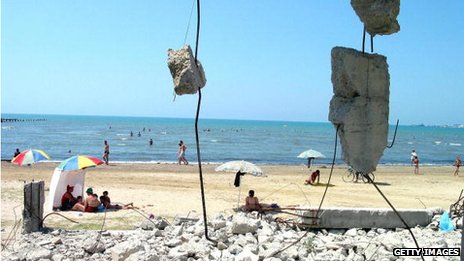 In transition in 2003 when illegal coastal developments were demolished
She believes the government can secure membership of the European Union and will assert the rule of law over the traditional culture of revenge, which still holds sway in what she calls the "backward" north.

Along with nepotism, corruption and organised crime, it is also one reason why Albania has so far failed to join the European Union."This problem is a priority of the government," she tells me.
Can Tony Blair help Albanians again? 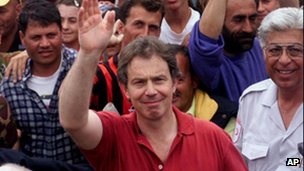 things are moving. And what's more, the new leader, Edi Rama, has a secret weapon.
There are 13-year-olds running round this country called "Toniblir" in tribute to the former British Prime Minister Tony Blair's support in 1999 for the beleaguered Albanian population in neighbouring Kosovo.
He is very popular here and he has offered to help the country towards EU membership.
Somehow, however, I still suspect it will be a long time yet before Era's optimism echoes through the corridors of Brussels.
How to listen to From Our Own Correspondent:
BBC Radio 4: Saturdays at 11:30 and some Thursdays at 11:00
Listen online or download the podcast.
BBC World Service:http://www.bbc.co.uk/news/magazine-23452125
Pubblicato da Hoteleri Turizem "Albania" a 20:46