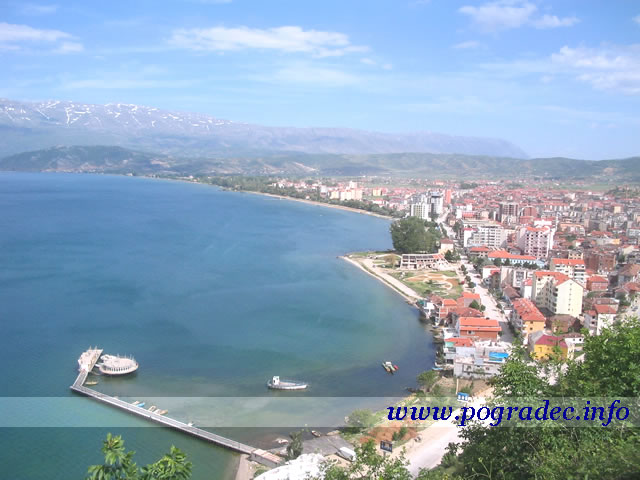 
www.pogradec.info- Guida e Pogradeci t ne Internet. Informacion i plote mbi Pogradecin, Hotelet ne Pogradec, Akomodimi ne Pogradec, transporti i pogradecit, arti dhe kultura e Pogradeci t. Foto nga Pogradeci, Restorante Pogradeci, Bare dhe Pub Pogradeci, Dyqanet e Pogradecit, hotel viktoria, Harta e Pogradecit. Lasgush Poradeci Poezi, Poezi nga Mitrush Kuteli. Liqeni i Ohrit, Peshku i mrekullueshem Koran qe rritet ne Liqenin e Ohrit, receta gatimi nga Pogradeci. Biznesi i Pogradeci t, foto nga Pogradeci.
Pogradec is a city in southeastern Albania, situated on the shores of Ohrid lake. It is the capital of the District of Pogradec, in the County of Korçë, located at 40.87°N and 20.70°E with a population of around 30,000 (2005 est). The total area of the district is 725 km². Pogradec alone occupies about 15 km². This city is surrounded by hills on the southern and western side. The lake is in the eastern and northern side of the city. The highway linking to Tirana, Elbasan and Korçë passes through the city. It is located SE of Elbasan, SW of Ohrid in the Republic of Macedonia, N of Korçë and NW of Florina in Greece. The name of the town comes from the South Slavic languages: Pogradec = Po(d) (under) and Gradec (little town) and means literally "Under the little town". It was known as İstarova or İstarye during Ottoman rule and was bounded to as kaza center in Görice Sanjak of Manastır Vilayet before Balkan Wars.
The shores of Lake Lychnidus were inhabited as early as (6000-2000 BC).Lake Ohrid is one of the locations for the Illyrian tribe of the Encheleans that is near Pogradec.The area in the antiquity was at the borderbetween Chaonia and Illyria. This is one of the locations that the Illyrians had started copying the styles of the Macedonians.
Drilon, the name of the river that flows into the lake near Tushemisht, is mentioned in early texts of antiquity. The hill overlooking Pogradec is the site of old castle ruins dating back to 5th century
Pogradec throughout the centuries was occupied by the Macedonians, Romans, Bulgarians, Serbians, Ottomans, French, Greeks, Italian, and German armies. The second Albanian language schools was started in Pogradec. During the Greco-Italian war in 1940-1941 Pogradec and the areas around it were cut in two by the war front. The town was a favorite summer escape for many communist government officials and particularly Enver Hoxha. The summer residences and the area around them were sealed off from the public.
Pogradec is well known for its famous writers and poets such as Lasgush Poradeci and Mitrush Kuteli, and lately Luan Starova. Their works are a crucial part of Albanian literature. The town is also the home of nationally acclaimed painters like Anastas Kostandini (Taso), Gjergji Lako, Gentian Zeka, Vangjo Vasili and Ilir Dhima. All kinds of sports are practiced in town, especially by the youth. Pogradec has a professional soccer team (currently in the second division) which holds the name Pogradeci. There are several varsity soccer teams mainly composed of high school students. Even volleyball and basketball are played competitively. During the summer, beach volleyball draws the attention of all the residents. Many professional volleyball teams from Albania and other Balkanic countries participate in a championship which lasts about two weeks. Pogradeci team has been awarded the first prize several times. Other sports to mention are swimming and boxing. The boxing team, "Dragoi", is one of the top teams in the nation and has always trained champions. Pogradec has also a rich folklore. Many songs and dances have been created throughout the centuries. Their themes are based on the beauty of the lake and the love for nature. Lately, with the initiative of "Pirro Xexi" puppet theater, the "Puppet Theater Festival" has been taking place in town. The participants vary from national to European level. All towns around Lake Ohrid gather for Lake Day in a festival where local delicacies including food and culture are showcased.
Pubblicato da Hoteleri Turizem "Albania" a 20:01